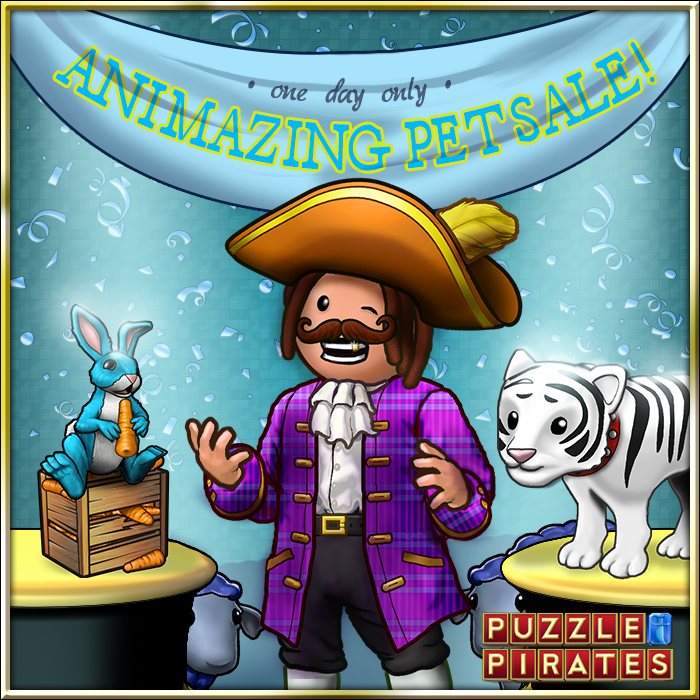 Time to ransack the Palace Shoppe in yer hunt for barrrgains and goodies! The Department o' Treasury has dug into the pet vault to bring back some pets that haven't been available for quite some time. Plus, they found a new sheep lurking in the shadows!

Ice and the February Update!

The first month of 2009 is almost gone and we're rapidly approaching our next release, due in the next week or so. We invite everyone to get on over to the Ice testing ocean to see what's coming in that update!

After that, our plan is to turn our attention to an area we know is on many players' minds: pillaging, and what sorts of improvements and encouragements we can add to it.

While there are numerous areas in which pillaging could be "updated", internally we are currently exploring two key areas:

We'd be interested to hear your thoughts and comments on this. We've started three threads in the forums for your feedback:

We'd love to hear your thoughts as they relate to these three areas, and we hope to see you on Ice in the next few days as we ramp up toward our February release!

Monkeys seem to be the theme of this release!

In addition to the petulant piece rearranging monkey in the new Foraging Puzzle, we've also added something of a rogue element to the Seas. Henceforth, certain Pirate ships will find themselves facing off against vessels filled with hungry simians. I know! Crazy monkey on Pirate ship action! It's armageddon!

The Pirate community at large will be relieved to note that these voracious monkeys have so far limited themselves to flinging cannon shot. They have also shown a preference for vessels that have already shown themselves ready for heated battle, so they should not interfere with the pillaging activities of the average Pirate.

For those wondering why a ship full of monkey's might be warranted on the Ocean, the answer is fairly simple: From time to time, wily Pirates hit on ways to earn their loot without facing a challenge or two. Monkeying with the game in this way is, of course, an entirely Piratey thing to do. But we don't want those Pirates losing their edge! Rather than putting further limits on the comings and goings of this crew or that, we thought something a little more fun might do the trick. Who doesn't love the prospect of crossing swords with a band of angry monkeys?

The Puzzle Competition feature added during the last release enables Pirates to participate in OM-organized competitions from anywhere on an Ocean. Prizes are awarded either to the top performers during the competition or on a tiered basis, with prizes going to the best scores in each puzzle performance tier.

Unsurprisingly, there was much discussion internally on the best way to award prizes for the Puzzle Competition. In fact, the discussion continues: we may find ourselves adding additional variants to create more interesting (or fair) competitions in the future.